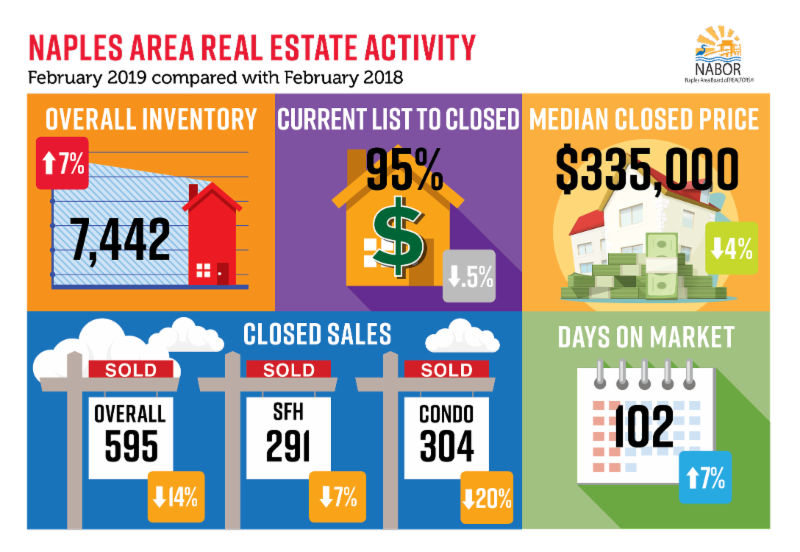 The report showed overall sales were up 17 percent in April over March, and March's sales were higher than February.
April's Market Report and showing activity provided by ShowingTime, a REALTOR® resource that tracks agent listing appointments with potential buyers, it took an average of 15 showings for a property to secure a contract in April.
The uptick in showings during the last few months are a positive indicator of continued buyer interest in our area. And while April's overall median closed price decreased 5.6 percent to $340,000 in April 2019 from $360,000 in April 2018, April 2019's median closed price was higher than both January and February's median closed prices.
The Report also showed nearly 1,000 properties went from active to either terminated, expired, or withdrawn in the Southwest Florida MLS during April, which directly impacted April's ending inventory level as seen in an 11.1 percent decrease to 6,435 properties in April 2019 from 7,239 properties in April 2018. But April saw the number of new condominium listings increase by 9.2 percent; whereas there was a decrease of 3.2 percent for new listings in the single-family homes market.
Despite old-fashioned beliefs that our area is predominately seasonal, the last few years of home sales activity after Easter are proof that this is just not the case anymore.
April and May have always been our strongest months for closings historically. But unlike last year, April's Report this year shows signs of a possible new trend: more closed sales for homes on the lower end of the price spectrum versus last year which had more closed sales in higher price points.
The Report shows closed sales of single-family homes in April 2019 increased 4.4 percent, but closed sales of condominiums increased 20.1 percent in April 2019 compared to April 2018 market statistics. Further, the trend toward more sales of lower priced properties. Also the activity tracked over the last 12 months where there was a 4.3 percent increase or 2,727 closed sales of condominiums in the under $300,000 price category compared to a .8 percent decrease in this same price category for single-family homes (1,037 closed sales). The increase in condominium inventory is also a contributing factor to this new trend.
The NABOR® April 2019 Market Reports provide comparisons of single-family home and condominium sales (via the Southwest Florida MLS), price ranges, and geographic segmentation and includes an overall market summary. NABOR® sales statistics are presented in chart format, including these overall (single-family and condominium) findings:

How does this effect you?If you are considering selling your home and buying something smaller or maybe something bigger, now maybe one of the best times to capitalize on great interest rates. Here is a link for an updated home value report: Home Valuation ReportIf you are looking to buy should you wait? That's a great question. Will home values continue to go up 10% year over year? I don't think so. Will there be a huge drop like 2009, 2010 etc? I don't see that either. What I do see are interest rates low now that continue to go up that make it more and more difficult to buy the longer you wait.Here is a list of all the homes currently for sale in Naples: Naples Homes for Sale